Selenium (Se) is an essential dietary trace element in both animals and humans. It participates in various physiological processes in the form of selenoproteins or the amino acid selenocysteine. 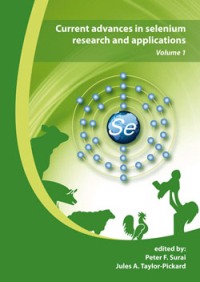 Se is a controversial trace element. There is a narrow gap between essentiality and toxicity. On one hand there are important environmental issues considering selenium as a pollutant while on the other hand global selenium deficiency is mentioned. Se deficiency is considered as a risk factor for the development of various diseases in human and animals.
Inadequate Se levels in food and feeds are a major concern in European countries which are caused by decreased Se availability from soils as a result of low soil pH and usage of synthetic fertilizers. For the last 30 years sodium selenite is used as a feed supplement and it seems likely that this is not an optimal form of Se. The usage of organic selenium in animal diets could help to maintain optimal Se status as well as high immunocompetence, productive and reproductive performance.

The aim of this collection of articles is to provide updated information on several important Se-related subjects, including Se status in Europe and ways of its improvement, advances in Se analysis and speciation in biological material, roles of selenium in poultry, pig and ruminant nutrition. Production of functional Se-enriched food, the relationship between selenium and mycotoxins, polyunsaturated fatty acids as well as reoviruses are also addressed.
This book will provide nutritionists, veterinarians, human doctors, researchers and other readers with new insights on Selenium

edited by: Peter F. Surai and Jules A. Taylor-Pickard