Source: kennislink.nl
According to classical ecological theory, only one predator can survive when two predators are after the same prey. Theoretic ecologists of the university of Amsterdam, however, come to whole other findings. 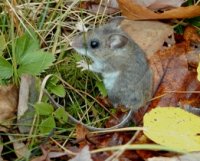 Two computer models were developed to research the populations of predator and prey. The models showed that predators that live off the same prey help each other by selecting prey of different ages. In both models the prey live in a surrounding that has so called scramble competition. This means that all available food is divided equally among the animals. This means that when there isn’t enough food for everyone, no one will have enough to eat.

In the first model, the group of prey consists of a lot of young animals, and there isn’t enough food to go around. Predator A catches young animals and can survive. By taking away the young animals, there will be less competing for food among the prey. Young prey can grow faster and breed sooner. This causes predator B, that depends on adult prey, to have enough to eat also. Without predator A this would not have been possible.

In the second model, the scramble competition takes place between adult prey. In this case, predator B diminishes the competition by catching the large animals. The remaining adults can put more energy into reproducing themselves. There will be more young animals in the population, therefore predator A will have enough to eat as well.

Because predators A and B feed off the same prey, they compete with each other. But they also depend on each other. According to the researchers, the enormous biodiversity on earth shows that models such as these function as well. If only one species would survive in each competition, as the classical theory suggests, the amount of predators on earth would be significantly smaller.