Source: nationalgeographic.com, photo by David M. Jensen
Monkey males who wash themselves with their own urine could be irresistible to females. While human males have to buy aftershave, male capuchin monkeys always have some at hand. 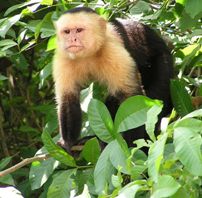 Both males and females of several monkey species urinate into their hands and vigorously rub the urine into their fur. Scientists have developed diverse theories to explain this, varying from regulation of body temperature to communication of aggression.

A psychologist from Trinity University in Texas put female capuchin monkeys in an MRI scanner and then let them smell the urine of both young and adult males. The resulting brain images show that the urine contains sexual signals. The areas of the brain associated with smell and reproductive behaviour were activated more by the urine from the adult males than from their younger counterparts. It is possible that the urine, which also contains the male hormone testosterone, indicates the male’s status. Females mate about 80 percent of the time with alpha males, who have more testosterone in their urine.

What the urine-rubbing monkeys are trying to achieve isn’t completely clear yet. The young animals and females also do this, and the males’ reactions to females’ urine hasn’t been tested by MRI yet.

The results of this study were published in the American Journal of Primatology.
Licence photo: Creative Commons Attribution-Share Alike 3.0