Source: trouw.nl
A German biologist is studying elephant talk. For her research, she visits the elephants of different European zoos (Emmen, Berlin, Hamburg and Cologne). Her study focusses on the difference .... 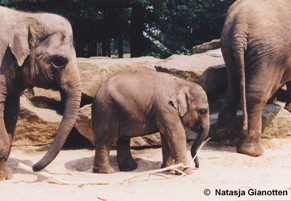 between the language of African and Asian elephants, young and old elephants, and males and females. The elephant talk is recorded and played back for other elephants. The sounds are analyzed, as well as the reactions of the animals to these sounds.

Elephants communicate with sounds within the audible range of the human ear, but also with infrasonic sound. These are very low frequencies that are not audible for humans. But they are for elephants. With these sounds, elephants can communicate over very long distances.

The group of elephants in Emmen is of interest, as it is the largest herd of elephants in Europe. It was noted that Radza, the bull, did not ‘talk’. The seven females and six children, on the other hand, ‘talked’ remarkably much. For now, it is assumed that Radza does not need to ‘talk’ in order to communicate. No one challenges his authority, he is the only male in the group and weighs 7,2 tons. The heavy chattering in the rest of the group, compared to other groups of elephants, is probably caused by the high amount of youngsters.