Source: exeter.ac.uk
For 5500 years horses are being kept for transportation, milk and meat. This is more than a thousand years longer than was previously assumed. Researchers from the University of Exeter discovered the traces in Kazachstan. 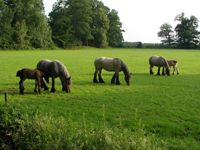 A team of archaeologists from the British university discovered evidence for the early domestic use of horses. The horses were milked, they were ridden and their meat was eaten. The researchers conclude from this that the animals were being tamed at this early. ‘Bit damage’ was found on bones, suggesting that the animals were ridden, and remnants of horse milk was found in old jars. To this day horses are being milked in Kazachstan. A light alcoholic beverage (kumis) is made from the milk by fermenting it.

By the way, the first tamed horses in Europe are found only two thousand years later.