Source: nrc.nl
Macaque grandmothers sometimes take on the care for their grandchildren. This can go so far that they even start to breast feed again. This remarkable behaviour was seen in Japanese macaques. 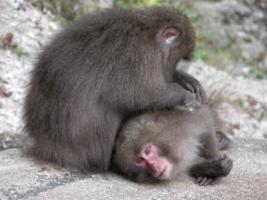 The results of this study may explain why mammals can live far beyond their own reproductive years. This is also called the ‘grandmother hypothesis’. In this theory female social animals (so also humans) that are no longer fertile are thought to play an important role in the survival of their grandchildren.

Monkeys sometimes adopt young, but these are usually females that have just lost year own young. In a group of Japanese macaques (Macaca fuscata) though this was seen in females that had not reproduced in years. The macaque group in Katsuyama has been studied since 1958 and the family relations of all animals are known.

A 24 year-old grandmother cared for a grandchild after the mother temporarily disappeared from the group. She kept the child with her and cared for it. When the mother returned she took on the mother role again. Another female of 23 years, which is old in macaque terms, took on the complete care for her 14 month-old granddaughter. The mother of the macaque girl was too preoccupied with her latest offspring. After a while, the grandmother even produced milk. In the other case it is not likely that the grandmother produced milk, because the time period was too short, but her caring for the child and her keeping it warm probably kept the child alive.