Source: nu.nl
The native red squirrel, which is almost entirely ousted in Great Britain by the American gray variant, is suffering severely of a virus carried by the gray variant. 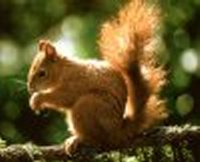 Up to now it was assumed that gray squirrels are elbowing out red squirrels by Being stronger and better in finding food. Latest research from several British universities have shown, however, that a virus is responsible for the disappearing of the red squirrel.