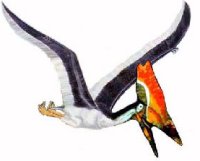 A skull found in Brazil revealed that the crest grew during puberty and probably functioned to impress the other sex. The research was published in the specialist journal Palaeontology. According to specialists of Portsmouth University, the pterosaurusses showed off their crests as courtship behaviour. Paleo biologist Darren Naish poses that the crest was a sign of being sexually mature, comparable to a peacocks fan, with which a mate is tempted. It was a giant cockscomb with bright colours that were paraded, Naish told the BBC.

The theory is based on the skull of the pterosaurus species Tupuxuara, which was recently discovered in the north of Brazil. It was a unique discovery. World wide only a few fossils exist, and all adults.

Dr. Naish and his collega dr. David Martill investigated the skull and discovered that it differed from juvenile pterosaurusses. Instead of a large triangular crest from the snout to the back of the head, this crest consisted of two parts. One part grew from the back of the skull and one from the front growing backwards. The two crests only became on during puberty.
This finding is significant as it related the growth of the crest to physical adulthood and thus with sex, according to dr. Naish.