Source: Dierenpark Wissel
Among the Silvery Marmoset (Callithrix argentata) in Wissel Zoo (Epe, the Netherlands) a twin is born. Wissel is the only zoo in The Netherlands with this type of dwarf ape. 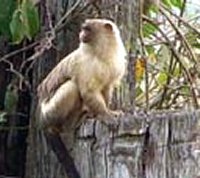 It is the first time that a Silvery Marmoset couple has produced offspring. The little ones have made it through their first critical days and are doing well. The parents have only been in Wissel Zoo since May.

For Silvery Marmoset a European Studbook (ESB) is being kept. In this register the data of certain endangered species are recorded in order to coordinate their reproduction.
Silvery Marmoset live in small family groups of around twelve apes. The menu of these dwarf apes consists of insects, leaves, fruit and gum resin.