Source: PVH
The foundation for the protection of fish is thanking garden centre GroenRijk for their initiative to stop selling goldfish bowls, as it is not a good housing for fish.
In the presence of the animal protection society, GroenRijk smashed the last goldfish bowl to pieces in front of their store. 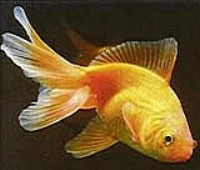 Due to the round shape of the bowl, the temperature differences are higher than in a normal aquarium, the animals cannot orient themselves, there is too little swimming space, and too little oxygen.

Thus, the animal protection society is calling attention for fish. Fishes are animals with feeling and consciousness and perceive much more than people have ever suspected. They communicate with movements, sounds, colour signals and light signals. With their extra sense, the sideline, which runs on both sides of their body, they can detect the slightest movements in the water. In Germany, the goldfish bowl is already banned, in the Netherlands not yet.