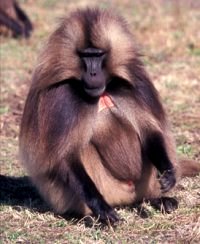 This paper examines the effect of male number and rivalry between males within a clan on their ability to compete for access to a clumped food resource. The data come from a study of a multilevel colony of hamadryas baboons (Papio hamadryas hamadryas) housed at the Madrid Zoo. The colony consisted of 12 harem-holding males and 40 sexually mature females, and was organized into five single OMUs and two clans (containing three and four OMUs, respectively). The top-ranking male of one of the clans was removed and later reintroduced, so the study involved an analysis of the composition of clans and OMUs and of the males' use of the feeding area across three study periods: preseparation, separation, and reintroduction. The findings reported indicate that both males and females derived clear advantages in the context of contest competition for access to clumped food if they were members of clans, because the males and females from large clans had a feeding advantage over those from smaller clans and single OMUs. Furthermore, rivalry among males within the clan reduced their ability to compete for food against males outside their clan. This paper provides empirical evidence for one of the potential advantages that hamadryas males may enjoy if they are attached to clans, and also provides empirical support for the general hypothesis that a large number of males in a group may provide fitness-related benefits to the group members, provided they are able to cooperate with each other.