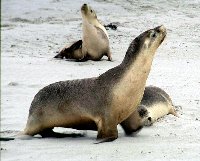 Steller sea lions (Eumetopias jubatus) were fed restricted iso-caloric amounts of Pacific herring (Clupea pallasi) or walleye pollock (Theragra chalcogramma) for 89 days, four times over the course of a year to investigate effects of season and prey composition on sea lion physiology. At these levels, the sea lions lost body mass at a significantly higher rate during winter (1.6 ± 0.14 kg day−1), and at a lower rate during summer (1.2 ± 0.32 kg day−1). Decreases in body fat mass and standard metabolic rates during the trials were similar throughout the seasons and for both diet types. The majority of the body mass that was lost when eating pollock derived from decreases in lipid mass, while a greater proportion of the mass lost when eating herring derived from decreases in lean tissue, except in the summer when the pattern was reversed. Metabolic depression was not observed during all trials despite the constant loss of body mass. Our study supports the hypothesis that restricted energy intake may be more critical to Steller sea lions in the winter months, and that the type of prey consumed (e.g., herring or pollock) may have seasonally specific effects on body mass and composition.