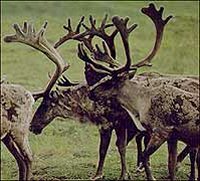 Animals were fed a complete pelleted diet ad lib. that contained 2.54% N in dry matter that was 80%±2% (X±SD) digestible. Female reindeer lost 64%±14% of body fat but gained 34%±11% of lean mass from 10 wk prepartum to parturition. These changes were equivalent to average balances of -14.14±2.35 MJ d-1 and 10±3 g N d-1. Blood cells, serum, and urine declined in 15N/14N in late winter as body protein was gained from the diet. Blood cells of newborn calves were more enriched in 15N and 13C than that of their mothers, indicating the deposition of fetal protein from maternal stores. To quantify pathways of N flow in reindeer, N balance was measured by confining animals to cages for 10 d at 4 wk from parturition. N balance was inversely related to 15N/14N in urea-N but not related to 15N/14N of blood cells, creatinine, and feces. The proportion of urea-N derived from body protein increased above 0.46 as N balance fell below -200 mg N kg-0.75 d-1. Proportions of urea-N from body protein were -0.01±0.21 in pregnant females before and after caging and were consistent with average body protein gain in winter. Storage of protein allows reindeer and caribou to tolerate diets that are low in N without impairing fetal development.