Source: sciencemag.org, photo by NOAA/MBARI
A female octopus may rightly bear the title 'Supermother'. She brooded on her eggs, 1400 metres deep, for four long years. She is now gone, though, so the title is posthumous. 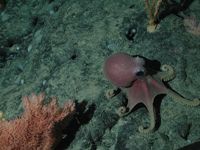 Quite by chance, the octopus was first seen in 2007 via a remotely operated vehicle (ROV) exploring the Monterey Submarine Canyon, a deep trough off the California coast in the United States. On a rocky outcropping 1397 metres deep, the octopus (Graneledone boreopacifica) sat with her arms curled around her eggs. Her many scars made her easy to recognise; the project’s scientists decided to keep observing her. During a period of 53 months (more than four years), they visited the octopus 18 times. They noticed that she was not eating; she pushed away crabs and shrimp – usually on the menu for this species – that came too close to the eggs. She even refused to take a piece of crabmeat offered via the arms of the ROV. The investigators suspect that she was eating damaged or unfertile eggs, yet the marathon brooding session eventually took its toll. The octopus, light purple when first spotted, slowly but surely turned a ghostly white. Her skin sagged, her mantle shrank and her eyes clouded. Female octopuses almost never survive after brooding, and indeed, in September 2011 this supermother was seen for the last time. Evidence of her heroic brooding success has been found, though: the remnants of her empty egg capsules.