Source: burgerszoo.nl
It's called parthenogenesis: asexual reproduction without fertilisation. This process was already known to occur in a few species of reptiles, insects and fish, including four kinds of sharks. Until now, however, parthenogenesis had never been demonstrated in a ray. 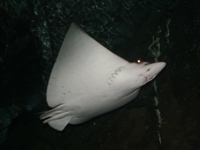 Now, in Burgers’ Zoo, parthenogenesis has been shown to occur in the ray, and specifically in the eagle ray. Burgers’ Zoo is the largest breeder of eagle rays in the world. The tropical coral reef aquarium of Burgers’ Ocean has been the birthplace of 37 eagle rays. The aquarium houses two adult males and four adult females. A tiny sample is taken from the barb on the tail of each newborn ray. This procedure is comparable to clipping a human’s nails: the animal does not feel it, and the barb grows back. DNA for the determination of paternity can be isolated from the layer of skin around the barb. The most recently born ray, it turns out, was unrelated to both males in the aquarium. Its genetic material came solely from its mother. Unfortunately, the young ray died after three days. (Its death was due to a bacterial infection not associated with its genetic makeup.)

The large number of eagle ray births in Burgers’ Ocean is an indication that these animals are doing quite well. Eagle rays are not easy to keep. They are sensitive to parasites, need a lot of space, and require very specific water quality. Those caring for the animals know precisely what each ray eats, as they spend roughly an hour a day feeding the animals individually.