Bling for a magpie

Source: vroegevogels.vara.nl
Magpies love shiny objects. Or do they? Researchers from the University of Exeter have now dispelled this myth. Not only are magpies not especially attracted to shiny items, they are even somewhat afraid of new things. 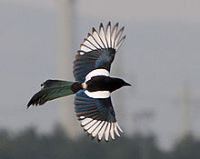 Folk wisdom tells us that magpies love shiny objects. These scientists wanted to find out more about this behaviour with the aid of good research, so they ran tests with both wild and captive magpies. Two piles of objects were each placed 30 centimetres from some food. The one pile consisted of shiny objects such as screws and silver foil. Identical objects were painted blue in order to create a second, non-shiny pile. They then monitored the magpies’ reactions to both kinds of objects and to the food during 64 trials. Only twice did a magpie choose the shiny objects, and it dropped the items again very quickly. The rest of the time, the birds in the experiments ignored both the shiny and the blue objects. Furthermore, the birds ate less of the food in the presence of the shiny and blue items. They demonstrated a neophobic reaction, indicating their fear of new things.

Probably, people think that magpies are attracted to shiny things because, by definition, they are easy to notice. A bird taking a shiny item captures our attention much more than one carrying a nondescript object.