Source: scientias.nl
Elephants have large ears, and they can certainly hear very well. They can even perceive rain and thunderstorms 250 km away. Herds of elephants are able to adjust their routes based on the information they pick up. 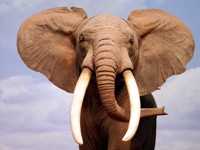 A group of Namibian elephants were followed between 2002 and 2006. Equipped with a GPS device, researchers could see exactly where the animals were and where they were headed. The Namibian climate is primarily warm and dry, with the exception of the rainy season in the months of January, February and March. It turned out that elephant travel during this wet season is very erratic. According to the investigators, the elephants ‘feel’ the thunderstorms, even at a distance of hundreds of kilometres. Rainstorms and thunderstorms produce low-frequency sounds such as the drumming of raindrops on the earth or the clap of thunder that accompanies a bolt of lightning. The scientists do not know precisely what the elephants are hearing, but the animals can detect the storms; they then walk in the direction from which the sounds are coming. The animals need the rain after the dry season, and adjusting their routes in this fashion gets them to the water sooner.

In PLOS ONE, investigator Oliver Frauenfeld of Texas A&M said that this information can also be used in efforts to protect elephants from poachers: if conservationists know where it is raining, they know where the elephants are headed, and they can follow the animals in order to better protect them.