Source: scientias.nl
Children can play for hours and hours. We are learning to recognise this same tendency in increasing numbers of animal species, even in such unexpected animals as reptiles, wasps and other invertebrates. 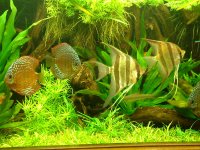 Play is repetitive behaviour that has no function within the context in which it occurs or at the age at which it is expressed. It is initiated voluntarily when the animal or person is relaxed, or when stressors are at a minimum. This definition was formulated by University of Tennessee scientist Gordon Burghardt who, together with colleagues, investigated if fish (in this case: cichlids) could also engage in play. A thermometer was placed in an aquarium containing three male cichlids. The thermometer was anchored to the bottom with a weight so that it was suspended vertically, and researchers noted the fishes’ reactions. The cichlids began to play: they struck the thermometer repeatedly, making it lean diagonally and then right itself. This behaviour was demonstrated regardless of the presence or absence of food or of other fish. According to Burghardt, the behaviour fulfils all the conditions necessary to be characterised as ‘play’. The stimulus for continuing the behaviour appeared to be the rapid righting of the thermometer. A similar stimulus and response had been noted earlier: octopuses pulled balls underwater and then watched them pop back up again.

The scientists emphasise the importance of research on playful behaviour, as it gives us insight into our own behaviour and its origins. Playfulness is an element of our evolutionary history, not an arbitrary, meaningless behaviour. As Burghardt says, “Play is an integral part of life and may make a life worth living”.