Nutritional Requirements and Diet Choices of the Pygmy Rabbit

Source: L.A. Shipley, Journal of Chemical Ecology, Volume 32, Number 11, 2006
Sagebrush (Artemisia tridentata) comprises up to 99% of the winter and 50% of the summer diets of pygmy rabbits (Brachylagus idahoensis). Few animals specialize on such plants as sagebrush, which contain high levels of plant chemicals that can be toxic. 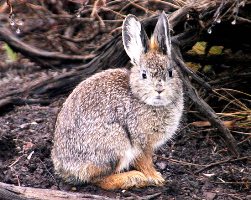 We investigated the nutritional requirements of pygmy rabbits and their ability and propensity to consume sagebrush alone and as part of a mixed diet. We compared diet choices of pygmy rabbits with that of a generalist forager, the eastern cottontail (Sylvilagus floridanus). Pygmy rabbits had a moderately low nitrogen requirement (306.5 mg N/kg0.75/d), but a relatively high energy requirement, needing 750.8 kJ digestible energy/kg0.75/d to maintain their body mass while residing in small cages. They digested fiber in pelleted diets similarly to other small hindgut fermenters, but both cottontails and pygmy rabbits digested the fiber in sagebrush better than expected based on its indigestible acid detergent lignin content. Pygmy rabbits consumed more sagebrush than cottontails, regardless of the amount and nutritional quality of supplemental pellets provided. When consuming sagebrush alone, they ate barely enough to meet their energy requirements, whereas cottontails ate only enough sagebrush to meet 67% of theirs. Both rabbit species ate more sagebrush as the quality and quantity of supplemental pellets declined, and more greenhouse-grown sagebrush than sagebrush grown outside. Urine was more acidic when consuming sagebrush than when consuming pellets, indicating detoxification by the liver. Pygmy rabbits do not require sagebrush to survive, but seem to tolerate terpenes and other plant chemicals in sagebrush better than cottontails do.