Ban on selling dogs and cats in Belgian shops

Source: hln
In Belgium, a prohibition on selling dogs and cats in shops is on its way. The direct aim is to prevent impulse purchases. Indirectly, it is to prevent behaviour disorders in dogs. In some countries, the prohibition already exists. 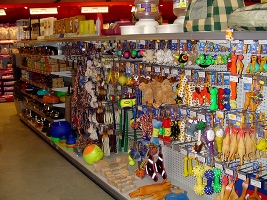 At the moment, the law of animal wellbeing prohibits the sale of dogs and cats on the public road and markets. The new law will extend the ban to shops, after an advice from the Council of Animal Wellbeing. The council pointed out that dogs which are sold in shops often develop behaviour disorders, because they do not become socialized.
The prohibition does not count for animals which are bought for business undertaking, such as cows, sheep, etcetera. The purchasing of these animals are carefully considered, thus the reasoning goes.

Animal rights organisation Gaia was pleasantly surprised by the new law, which was adopted last Tuesday by the Chair Committee of Public Health.