Source: Wageningen UR
The thirty species of seahorses and their close relatives, the great pipefishes, knifefishes, trumpetfishes, sea dragons en ghostfishes are real fishes with fins en gills, just like sticklebacks, for example. But how can their bizarre appearance be explained? 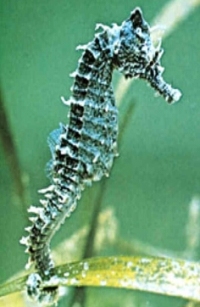 Research at the University of Wageningen has shown that the appearance of seahorses was determined during evolution by the animals preference for a quick catch, as a small prey can be caught most efficiently with a long snout.
Researchers Marc de Lussanet and Mees Muller of Wageningen University studied the feed intake of pipefishes and knifefishes. These praying fish attack several times a minute with the speed of lightning to catch a prey, for example amphipods. The researchers discovered that the fishes long snout turned them into the fastest feeding backbone creatures.
The two researchers figured that with a long snout, a small turn of the head suffices to catch a prey. Their calculations predicted that the smaller the mouth of the fish, the longer its snout will be. A limiting factor is the size of the prey that has to fit through. When the mouth is large and the snout thick, feeding will be fastest with a short snout.
Analysis of high-speed movies confirmed the predicted relation between snout size and speed. This means that seahorses are extremely well adapted to their environment and that they are formed by evolution in a remarkable way, as it is the size of the prey that determines the optimum length of the fishes snout.
Seahorses and their close relatives live in sea grass beds and coral reefs, where it is not an advantage to be able to swim fast. To compensate, their remarkable build and gracious movements offer an excellent camouflage. Their prey, small crustaceans and other plankton, they catch by a small turn of the head. Because the prey is small, they take such a fast bite several times a minute. In general these fishes approach their prey slowly, before gobbling them down. Because this movement only last 1/200th part of a second, it was only discovered after the introduction of ultra fast filming techniques.