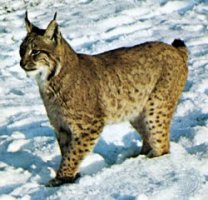 The body mass of lynx kittens up to four months of age increased as a linear function with age. Daily growth rate (in grams) was minimal when the kittens were switching from milk to solid food at the age 41-60 days and was maximal at the age 61-80 days. Body mass dynamic and daily growth rates of kittens depended on the husbandry conditions of adult animals (or probably on their subspecies) and litter size, but did not depend on the sex of the kittens. Specific spontaneous fights during kittens' ontogenesis showed the trend to affect kittens' body mass dynamic and daily growth rate on some stages of kittens' development.