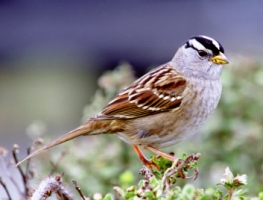 We recorded the behaviour of captive birds while simultaneously collecting 24 h locomotor activity. These data were used to define the behaviour displayed by captive birds during autumn and spring in order to compare the two migratory stages and to draw inferences for free-living birds. The predominant behaviour during day and nighttime was rest. Feeding occurred only during daylight hours but at a greater frequency in autumn than spring. Birds generally used their feet as the primary source of locomotion during the day termed jump. During the night, two distinct behaviours, beak-up flight and beak-up involving high intensity wing motions were observed and considered components of migratory restlessness. The frequency of the beak-up flight was greatest during spring and associated with the enhanced tempo of vernal migration. In both stages, migratory restlessness was preceded by a quiescent phase, the occurrence of which differed and related to time available for foraging and length of the night. Given these findings, we hypothesize that diel behaviours displayed by autumn and spring migrants in captivity highlight distinctions between the two life history stages.