Source: Reformatorisch dagblad
The Galapagos Islands are in 'ecological danger', according to the president of Ecuador, Rafael Correa. He has therefore issued an ordinance in Quito last Tuesday which considerably limits the access to the islands, which is situated a thousand kilometres west of the South-American continent. 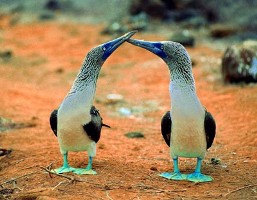 The islands form a national park of Ecuador. Due to their isolated location, the area is unique. A team of the United Nation currently pays a visit to the island, which they have declared to be a special inheritance of mankind.
Correa wishes to carry out a census, prevent the settling of new inhabitants, and limit air traffic and tourism. Tourists and inhabitants disturb and threaten the unique plant and animal life.