Diet of the Humboldt penguin in northern and southern Chile 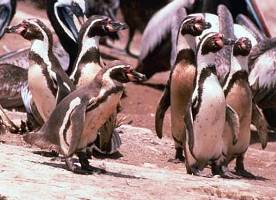 Field work was conducted on Pan de Azúcar Island in northern Chile in the breeding season 1998/1999 and on the Puñihuil Islands in southern Chile over two successive breeding seasons during 1997/1998 and 1998/1999. Penguin diet was studied by stomach-pumping birds and analysed by species composition, size and mass of prey. Fish were the dominant prey item at both sites, the contribution of cephalopods and crustaceans varying between sites. The fish prey consisted predominantly of school fish, but there were clear latitudinal differences in fish prey taken. Penguins in the northern colony consumed primarily garfish (Scomberesox saurus), while birds at the southern colony of Puñihuil fed primarily on anchovy (Engraulis ringens), Araucanian herring (Strangomera bentincki) and silverside (Odontesthes regia). The results showed significant differences in terms of numbers of fish taken between the two breeding seasons at Puñihuil. In 1997/1998 penguins consumed almost exclusively anchovy, while they fed primarily on silversides in the successive year. Almost all prey, except stomatopods, were characterised as being pelagic species that occur in relatively inshore water, consistent with the foraging behaviour of Humboldt penguins. The dependence of Humboldt penguins on commercially exploited, schooling prey species makes the species particularly susceptible to changes in prey stocks, due to non-sustainable fisheries management.