The Macleay's Spectre Stick Insect (MSSI) is a member of the stick insects and leaf insects. This branch of insects (Phasmidae) contains (as far as known) about 2500 species. Insects belonging to this family can vary in length from several centimetres up to half a meter. The common Indian stick insect (Causaurius morosus) and the European stick insect (Bacillus Rossius) are very well known. 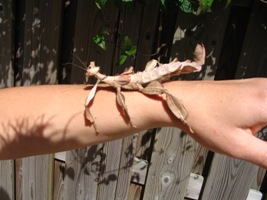 They are green, with 6 legs and antennas. They can be kept on ivy vines and are fairly easy to breed. The MSSI looks differently. It has broadening legs (the so called flaps) and abdomen. The insect is also known as the PSG9 or giant prickly stick insect. Males look quite different from females. The fame is 12 or 13 centimetres long. She is brown and sturdier than the male. Her feelers are shorter, her wings are reduced. Therefore, she cannot fly.
The male is 8 or 9 centimetres long and green. Its feelers are longer and its wings cover the abdomen completely. Males can fly.
MSSIs have a prickly appearance (hence the name: giant prickly stick insect). Alongside the flaps, in their back and belly, many small barbs can be seen (and felt).
With many types of stick insects, parthenogenesis occurs. This means that the animals reproduce without male intervention. It is not entirely clear whether this is also the case with the MSSI. According to some sources a male is needed to reproduce. Mating can last up to 24 hours. Shortly after, the male dies. Another source speaks of a female in a terrarium, which nevertheless lays eggs.
More about the Macleay's Spectre Stick Insect in the next newsletter: the development from egg till stick. Also: housing and feeding your stick.