Source: Nu.nl
In New Zealand, researchers have implanted a transmitter in a godwit at the start of this year. The godwit was then given the name E7.
E7 flew from New Zealand to Alaska and back again. During this flight, it flew 11.500 kilometres non-stop and broke the migration record. 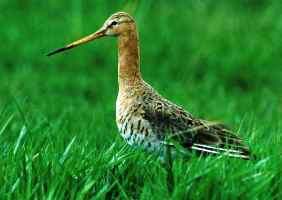 It has broken its own record from earlier this year, when it flew from New Zealand to the coastal wetlands of China. On this trip it flew 10.000 kilometres non-stop. The godwit remained in China for five weeks. It then moved on to a nesting home in Alaska. In July and August it flew about North America, and recently, it flew back to New Zealand non-stop.

Another fifteen godwits are being studied by researcher Phil Battley of Massey University, New Zealand. Battley uses satellite-tracking to keep an eye on the godwits.
Record-holder E7 has not yet appeared before the camera yet. For the time being, it remains in an extremely remote and inaccessible area, according to Battley.