Source: fish-school.com
Not only dolphins, sea lions and tigers are able to learn tricks. Even goldfish can be trained to play soccer and to jump through a ring.
Dean Pomerleau and his sun Kyle have developed a method to teach fish several tricks, based on positive conditioning. 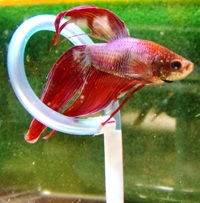 This means that whenever the animal shows the preferred behaviour, it is rewarded with food.
It all started when Kyle won two goldfishes at a school party. In order to make the fish a little more interesting, Kyle and his father thought of a way to teach the fish tricks. With a special stick, they could feed the fish under water in order to reward it. They taught it to play soccer by rewarding it when it touched the ball. Later on the fish was rewarded when it moved the ball. After a while it was only rewarded when it pushed the ball into the goal. After playing soccer, Kyles goldfish could also do limbo dancing, swim through a ring, and swim through a narrow tube.