Source: nrc.nl
Red deer (Cervus elaphus) genes that result in strong females are disadvantageous for the stags. The opposite is also true. Scottish and British researchers report this in the journal of science Nature. 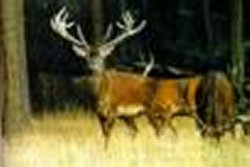 This genetic antagonism might well explain how such a large genetic variation could remain within the population. In theory, without genetic antagonism, due to natural selection only one type of super deer would remain, possessing optimum genes.
These animals would namely get most of the offspring. But due to the different genetic optima for stags and females, a wider genetic variation is obtained. Thus far, the phenomenon of genetic antagonism has received only little scientific attention. It has been observed before in fruit flies, but researchers suspected that the phenomenon was much more widespread.