Source: vroegevogels.vara.nl
At the end of november 2007, the WWF planted the ten millionth tree near the East-Congo city Goma. The trees have been planted in the vicinity of Virunga National Park. This is a project that has been running since 1987. 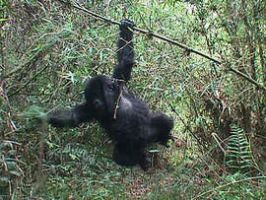 The trees are planted for several reasons. They can serve as an alternative source of firewood and building material for the local inhabitants and boost the economy. But they will also serve as a buffer for the vulnerable nature areas in the National Park of about 10.000 acres. Despite the ongoing civil war, the project has never been abandoned. This is a huge accomplishment. Because of the armed conflicts, more and more people from the surrounding areas have fled to Goma. The city and surrounding refugee camps have grown dramatically, and with it the demand for food and fuel.
The illegal forest clearings in Virunga National Park puts an increasing pressure on the habitat of the mountain gorillas

During the festive ceremony of the ten millionth tree, a new project was announced right away: over de next five years another two thousand acres of forest will be planted.