Source: vroegevogels.vara.nl
The Dutch SOVON foundation for bird research and the Dutch Bird Protection Society have composed a Climate Atlas of European Breeding Birds, in association with Dunham University. The atlas came out in January in several European countries. 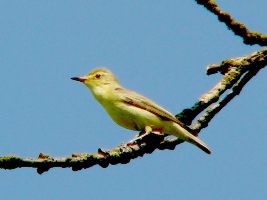 It gives an insight in the effects of climate change on 540 kinds of European birds. The atlas paints a picture of the environment of the birds 50 years from now. Two phenomena stand out: Birds that now live in southern areas will move to the north. Species that only occur in northern areas will see their habitat diminish. Several species will become extinct. For the Netherlands this means that the icterine warbler, the ruff and the short-eared owl will disappear. In 50 years time, the climate will be completely unsuitable for these birds. For birds that are settling here at the moment, the Netherlands will become a transit.
Other birds will take their place, for example the melodious warbler (Hippolais polyglotta), for the time being an exotic member of the icterine warblers. The melodious warbler has already been spotted in the south of Europe. And in fifty years time, the Dartford warbler, which currently lives along the Mediterranean sea, can be found as far north as Denmark.
These changes are very interesting for bird researchers, but for birds these rapid changed may be disastrous. According to a spokesperson of SOVON, birds can only survive these climate changes, when both the quality and size of the nature reserves are kept at a high standard, and when the composition of nature reserves takes into account the birds that may need to use the areas in the future.