Source: trouw.nl
The best known exclamation of parrots is 'hello', as parrots are capable of imitation of human speech. The definition of parroting is 'to repeat without understanding'. But after a heavy training, parrots do understand what they are saying. 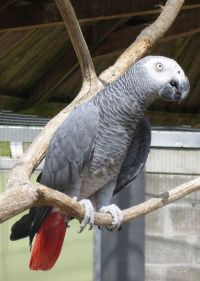 One famous African grey parrot has proven this. He could count to six, name colours and shapes and new approximately 150 words. He was not only capable of saying the words, but he knew what they meant as well.

In the wild, parrots mainly imitate members of their own group, for example their partner. When a parrot lives among people, it considers these people as group members and will imitate them. The auditory organ of parrots can capture a large range of sounds. This way parrots are capable of imitating the low tones of the human voice.
But parrots are not the only birds that can learn something. Hummingbirds and songbirds such as tits, blackbirds and crows can learn songs, which they usually learn from members of their own species. Starlings and bower birds can, just like parrots, imitate anything, even mobile phones, motorbikes and chainsaws.
Songbirds do have a different reason for imitating than parrots do. The more notes a male can sing, the better it scores with the girls.