Source: rotterdamzoo.nl
After many years, Rotterdam Zoo finally succeeded in breeding okopipis, or blue poison dart frogs. The ten blue baby frogs are meant to contribute to the survival of this endangered species. 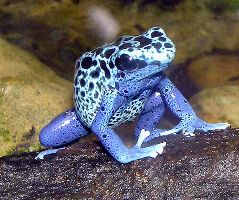 This news fits well in the Year of the Frog, the EAZA campaign that was launched not long ago. The European zoos will put extra effort in helping amphibians that are threatened with extinction. A news item was already dedicated to this in the previous newsletter.
The Okopipi (Dendrobates azureus) is one of the few kinds of frogs that can be recognized instantly, due to its wonderful blue color. In the wild, it can only be found in Suriname, where it is an endemic species. The animals habitat is restricted to the Sipaliwini savanna (450 kilometers south of Paramaribo) and only in isles of forest there. The number of remaining okopipis in the wild is estimated at 1000 or 1500 frogs.
The frogs survival is first of all threatened by the illegal catching of frogs for the trade in animals. Apart from this, it is possible that the savanna will fall prey to deforestation, stockbreeding or savanna fires. The entire habitat of the species could be destroyed all at once. This would be the extinction of the okopipi in the wild.