Source: California Academy of Sciences
In Tanzania a new mammal has been discovered. The animal has the size of a cat and the appearance of a large shrew. Its fur is orange brown. It has long thin legs and a long flexible snout. 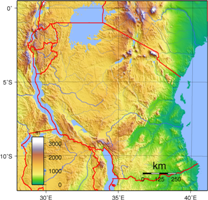 The giant elephant shrew or grey-faced sengi, as it is called, is described as a mixture between a mini antelope and a small anteater. The animal is not related to the shrew but to a larger group of African mammals such as elephants, manatees, and ant bears. These animals all have a common ancestor.
The giant elephant shrew has first been spotted on camera in 2005. In 2006 a number of animals have been caught, studied and prepared during a scientific expedition. It was then confirmed that the biologists were dealing with a new species. At the beginning of 2008, when scientific publications came out, the discovery became world news.
The animals live in the mountains of Udzungwa in Tanzania, on altitudes of 1000 meters. There are three other closely related Rhynchocyon species, that live in other areas of East Africa. The R. udzungwensis is the biggest of the four. Its diet is unknown, but its fellow species live off invertebrates such as earthworms, spiders and beetles.