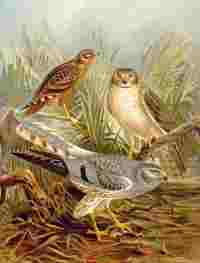 by following birds that had been equipped in Groningen (the Netherlands) with a satellite transmitter.
The Study Group Montagus Harrier helps to protect this bird of prey in the Netherlands. The total population in the Netherlands consists of less than forty breeding pairs. The study group investigates the hibernation areas of the Montagus harrier. In 2005 and 2006, a number of birds received a tracking device. Now a lot more is known about their flyway. The flyways can be followed on the internet. The study group has also been to West-Africa several times to look at the hibernation areas.
In January 2008 the mega-sleeping-place in Senegal was discovered. In central Senegal the most densely populated area of Montagus harriers was discovered. It is estimated that around five thousand Montagus harriers remain in this area. This is more than ten percent of the entire European population.