Source: overloonzoo.nl
The female Japanese serow in Overloon Zoo Parc has been given male company. The male was brought in from an Austrian zoo. This way, Overloon Zoo Parc wishes to see some baby goat-antelopes in the future. 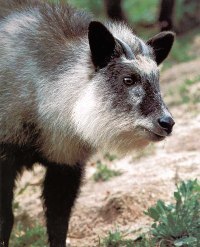 The Japanese serow (Capricornis crispus) is smaller than the Mainland serow (Capricornis sumatraensis) and grows approximately 80 centimeters high shoulder height. It weighs around twenty kilos.
Its fur is very dense. The back-hair of the males can range from white to purplish black. Its legs are brown or black. Some animals have a dark ´ruff around its neck. Under its chin it has a white beard that extends along the throat and jaws. Its ears are long and pointy and covered with long, dark hair. Its nose is dark and bald. Both males and females have short horns (approximately ten centimeters long) that bend backwards. In the wild, the animals inhabit the thick forests of Japan, where they live on hillsides at altitudes over a thousand meters high. Serows forage in the morning and afternoon. The rest of the day they rest in secluded areas. Their diet consists of leaves, sprouts and acorns.
The Japanese serows live a solitary life, in pairs or small family groups. They mark their territory with a clear fluid, which smells like vinegar. The fluid is produced in the pre-orbital gland. This is located in front of the eyes. Both males and females produce this gland-fluid.

The status of the Serow is currently ´not endangered´.