Source: vroegevogels.vara.nl
In Burgers' Zoo in Arnhem a jelly has been created to feed a crown-of-thorns starfish. Burgers' is the first zoo in the Netherlands to keep this starfish in an aquarium. 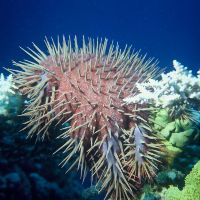 Crown-of-thorns starfishes (Acanthaster planci) are extremely poisonous starfishes and endemic to the Pacific Ocean. Its enemies are the humphead wrasse, the perch and the triton snail. As their natural enemies are caught on a large scale, the crown-of-thorns are becoming a true plague in the Pacific. Crown-of-thorns strip the corals bare. The large poisonous pricks make it difficult to pluck them off the coral reefs. Touching the pricks is not deadly but very painful. Crown-of-thorns can live up to thirty years and grow to sixty centimetres in diameter. Due to their gluttony, it is very rare for aquaria to keep crown-of-thorns. Burger’s will put the animals together with lion fishes, which are also poisonous. The jelly that has been developed for the crown-of-thorns is to be smeared over dead coral skeletons and serve as their food.