Source: zooantwerpen.be, zodiacanimals.nl
The Humboldt penguin (Spheniscus humboldti) is an endemic bird of coastal Chile and Peru. It has a black back and a white belly. Both males and females are around 70 centimetres in size and weigh four kilos. 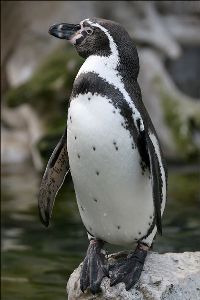 On their bellies black dots can be spotted. These dots remain the same throughout their lives and serve as identification marks. Humboldt penguins are designed for a water life. They cannot fly and move with less ease on land than in the water. but they are excellent swimmers and can reach speeds of 40 kilometres an hour. In the wild, the animals eat several kinds of fish, such as sardines and anchovies, octopus and crabs. In zoos, their diet consists of herring and whitebait.

Humboldt penguins are gregarious birds. A couple sticks together. Only when one of the two penguins dies, a new mate will be found. Females will lay two eggs on a mount of guano. The eggs will be guarded both by the male and female. After 40-42 days the eggs will hatch. Often, only one of the two chicks will survive. Both parents take care of the young, which will leave the nest after two months, to meet the rest of the colony.

Natural enemies of the penguins are foxes, caracaras, sea-gulls and vultures. Another threat is posed by fishing (penguins can drown in fishing nets and due to overfishing less food remains for them to be found), eggs being taken, as well as the guano, which the animals use for their nests. Guano is being used as fertiliser.

It is estimated that there are approximately 10.000 Humboldt penguins left in the wild. The animal can be found on the CITES list in Appendix 1.