Source: vroegevogels.vara.nl
Knowing at what time food can be found where or knowing which places are dangerous is crucial to mammals. But how does this work? Researchers of the university of Groningen have found some answers. 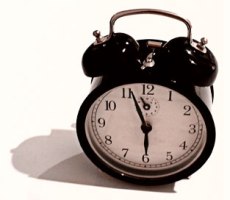 The biological clock plays a big part in the linking of time and place. The researchers have shown this in experiments with genetically modified mice, which they published in Current Biology.
Animals link time with place. They learn where water can be found in the dry season, or what places are to be avoided, due to predators. It was suspected that mammals use their biological clock to link place and time. Bees and birds also have this inner timing.
The hypothesis was tested with mice. A construction of three hallways was used. Food could be found at the end of each hallway. Depending on the time, a small electric shock was given together with the feed. The mice soon avoided retrieving the food around these times. But this was not the case with the group of mice that had their biological clocks switched off. To switch off the biological clock in a group of mice, researchers removed the genes that switch this clock on. The genetically modified mice that had to do without their bio rhythm, were incapable of retrieving the food at the right time. Thus researchers have proven that mammals use their biological clock in linking time and place.