Clinical nutrition was initially limited to treating general malnutrition and specific nutritional deficiency states. As nutritional science has developed, the field has gradually broadened to include the treatment of ... 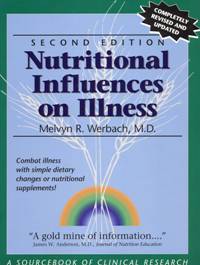 subclinical deficiencies and dependencies, as well as the provision of nutrients is massive doses as pharmacologic agents.
Part 1 is titled: Illnesses and the effects of nutrients, toxic metals and environmental sensitivities. Per illness experiments are mentioned where nutrients had or had not have an effect on this illness (positive or negative). These experiments can be either observational or experimental studies (with laboratory animals, in vitro or with humans).
The illnesses that are described are very diverse, from acne to cancer, from obesity to Parkinson’s disease.
In part 2 seven appendices are included. Among others a list with signs and symptoms of heavy metal toxicity and a guide to rule out food sensitivities can be found.

Despite the fact that the book is produced for human medicine, also a lot of interesting information on animal nutrition can be found.