Source: vroegevogels.vara.nl, photo: Wikipedia, Hannes Grobe
It was assumed that moles are virtually blind because they live under ground. Their sight would be normal at birth but decrease due to the dark. Three researchers have now taken a closer look at this assumption. 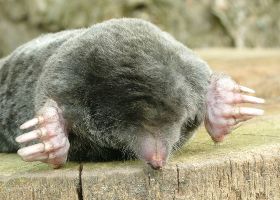 The three, two Spaniards and one Englishman, have published their findings in the scientific journal BMC Biology. They discovered that the blindness of moles is genetically determined. The development of the eye starts as normal, but in the embryonic stage, the development of the lenses stops. Two genes impede each other. As a result, both the retina with light-sensitive cells is not created properly, as well as the forming of the lens.