Iberian lynxes released back into the wild

Source: vroegevogels.vara.nl
Workers of the program LIFE for saving the Iberian lynx will release a number of lynxes that are born in captivity back into the wild in 2009. The Iberian lynx is seen as one of the most rare feline species. 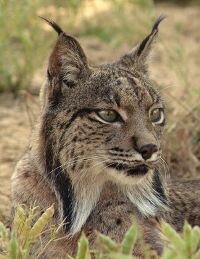 The population in the wild is diminished from 1100 animals in 1980 to a mere hundred in 2000. Now the number of animals is estimated at 180 of which forty females are still capable of becoming pregnant. The Iberian lynx is also known as the Spanish lynx or pardel lynx (Lynx pardinus). The animals resembles the European lynx but is smaller and has more and darker spots. Their length is 80-110 cm, and standing 60-70 cm at the shoulder. The animals weigh around thirteen kilo’s. Their tails are short and have a black end.
The prime feed consists of rabbits, but also other rodents and hares. The Iberian lynx lives in open Mediterranean forest and in maquis, both in lowland and mountainous areas, where many rabbits can be found.
The rise of agriculture diminished the habitat, but the Iberian lynx was able to survive in the mountainous areas. But the arrival of myxomatosis, that caused a large part of the population of rabbits to die, did the lynxes no good.
Small, separated groups still live in the south of Spain in the mountainous areas of the Sierra and in the wet nature areas of the Coto Doñana on the Atlantic coast.
In the Sierra de Andújar, the situation of the lynxes has been slightly improved over the last years, due to a rabbit breeding program, that uses large fenced off areas. These areas have natural growth and holes for the rabbits to breed.
The program LIFE is active in Spain and has the aim to prevent the extinction of the Iberian lynx. This year sixty Iberian lynxes were born in the wild and in the breeding centers. At the end of the summer of 2009, two couples of lynxes are planned to be released back into the wild together with some young animals.
Involved in the project are the Spanish government, the European Union and the WFF.