Source: The Waltham Book of Companion Animal Nutrition, Pergamon Press, 1993
Just like mammals, fishes can distinguish between taste and scent. A difference, however, is that the taste receptors of fishes can not only be found in the mouth but spread out over their entire body. 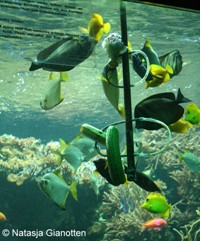 Having an own taste is important for quickly recognising and quickly taking in the right feed. This is nice for anyone who keeps fishes, as it looks quite attractive. But it is also important for the fishes themselves. A quick intake of feed prevents the loss of ingredients that dissolve in water, such as vitamins.