Source: WWF
At World Wetlands Day the government of Gabon (West Africa) has registered three important nature reserves at an international convention. The government thereby obligates itself use and manage these wetlands responsibly. 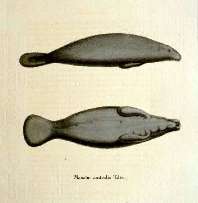 Over 800.000 hectares of wet and valuable wild life area can now be protected against logging and hunting. The area is inhabited by real land animals, such as elephants, gorillas, leopards and bushpigs, but also by many animals that live in and nearby the water. Examples of the latter are the African manatee, hippopotamuses, otters, pythons, the African dwarf crocodile and pelicans.

The African manatee is hunted on. Despite the fact that the animal is protected and that hunting on it is therefore strictly illegal, manatee meat was regularly sold at markets. In 2005 a WWF team started an investigation into this hunting practice. After an extensive research it appeared that a small group of hunters was responsible for almost all captured manatees. The hunters were approached personally and also the local community was addressed. WWF has learned from experience that a real change cannot be achieved until the public opinion is turned against the hunting. This community-based approach has succeeded. The manatee nets have been handed in and they will be burned ritually. The community is also ready to sign a manatee protection document.

Now that the area is officially protected the rules are even clearer. Whoever hunts at a manatee or another protected animal is risking imprisonment.