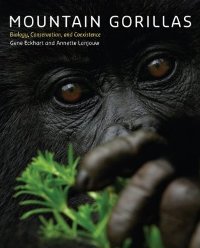 In this region the conflicts between men and nature are large. The human demands in land, water and minerals are increasing. The region is also torn by decades of intense conflicts and violence.
This book takes you deep into the mountainous rain forests of Uganda, Rwanda and the Democratic Republic of Congo to reveal the story of the mountain gorillas of the Virunga Volcanoes and Bwindi. The authors show how humankind affects the gorillas and their habitat, detail the innovative conservation and education efforts undertaken by governments and nongovernmental organizations, and explain how ecotourism and other conservation-focused enterprises support efforts to protect the two mountain gorilla populations.
The book is special because of the stunning pictures combined with the explaining texts. In four appendices detailed information on vegetation, biology and ecology and practical travel information are documented.

Gene Eckhart is a wildlife photographer who has worked extensively throughout the jungles, deserts, savannah plains, and woodlands of Africa. Annette Lanjouw is the director of the Great Ape Program of the Arcus Foundation and has worked for more than 20 years on conservation of great apes in Central Africa.