Source: WNF.nl
Protecting the wealth of species on earth is one of the main objectives of the World Wide Fund For Nature (WWF). The focus in this endeavour is mostly on groups of animals or on regions on earth. 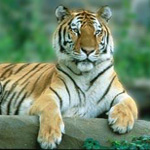 The care for individual animals is usually not the prime objective. But sometimes the people at WWF are glad to make an exception. As the fieldworkers know a lot about wild animals, they are sometimes called upon to help an animal in distress. Two veterinarians, researching the behaviour of African forest elephants in Cameroon, were asked to take a look at a baby gorilla. The animal was torn away from its mother by poachers and was left to die in a national park. The baby monkey showed signs of severe dehydration. With the help of intravenous fluids and antibiotics the animal could be saved. The baby gorilla is now adopted into a shelter for orphaned gorillas.

Also for a tiger a rescue was organised. The tiger, from a nearby national park, got trapped in a well and was barely able to keep its head above the water. The WWF workers tranquillized the animal, after which they were able to heave it out of the well. Luckily, the animal’s fall down the well had not caused it any injuries. The tiger could be returned to the national park directly. In India tigers regularly fall into and they cannot always be saved. The WWF is having lids made for wells so the local communities can cover them up.