Source: conservation.org, picture by Marco Rada from Conservation International-Colombia
Recently ten new species of amphibians have been discovered in Colombia. These discoveries were made during a three-weeks expedition in the mountainous Tacarcuna area of the Darien, near the border with Panama. The region is called a 'Noah's Ark'. 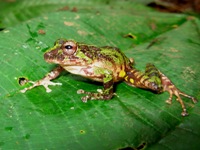 During the expedition, a team of herpetologists and ornithologists identified approximately 60 species of amphibians, 20 reptiles and almost 120 species of birds. It is believed that a large majority of these species do not exist anywhere else. The region is famous for its biological diversity. Historically the region has served as a bridge for the exchange of flora and fauna between North and South America.
The newly discovered species include, among others, an orange-legged rain frog, three kinds of poison dart frogs and three ‘glass’ frogs, named this way because of their transparent skin.
Researchers from the Colombian department of the environmental organisation Conservation International (CI) discovered the amphibians. The Darien region is currently relatively undisturbed, but it is endangered by deforestation and extensive cattle ranching. CI hopes that the recent discoveries will help to ensure that the area is well protected.

The picture is made by Marco Rada from Conservation International-Colombia.