The imagination of the dog owner

Source: bbc.co.uk
Does the guilty look of the dog only exist in the imagination of its owner? Dog owners regularly claim that they can read the expressions of their pets - especially that tell-tale look when they have done something that is not allowed. 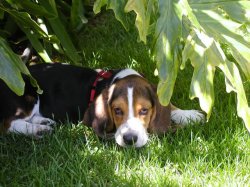 Researchers at a New York college made dog owners think that innocent pets had misbehaved. The owners still claimed to have seen a guilty expression.

When the owners were told that their dog had misbehaved, they saw a guilty expression, even when the dog done nothing wrong. Where there was any change in the dog’s expression, this could be explained as a reflection of human emotions. If the owner thought the dog had misbehaved and told the dog off, some dogs showed an admonished look. This was incorrectly interpreted by the owners as an admission of guilt. The researchers conclude that the so-called guilty look is a response to the behaviour of humans and bares no relation to the actions of the dog or a sense of having broken any rules.