Source: news.nationalgeographic.com
Results from a DNA study suggests that wolves became domesticated in southern China some 16,300 years ago, and that they were initially kept for food, not as watch dogs or pets. 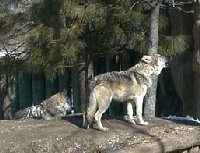 The researchers investigated the mitochondrial DNA of dogs from Europe, the Middle East and Asia. This DNA is passed down via the mother. The genetic diversity increased the farther east they looked. The greatest diversity was found in a region south of the Yangtze river in China. According to the researchers this larger genetic diversity indicates that domestication first took place here. It seems that several hundreds of wolves were domesticated between 5,400 and 16,300 years ago.

This is also around the period that the Asian hunter-gatherers were adopting a more settled, agrarian lifestyle. Therefore the researchers believe that the dogs were kept for food. Today dog meat is still eaten in China.

The results of the study were published in Molecular Biology and Evolution.