Source: telegraaf.nl
Every morning the Hamadryas baboons vote about where they will go to that day. Two or three males sit at the border of the group with their face towards a certain direction. The other males show their preference by positioning themselves behind one of these males. 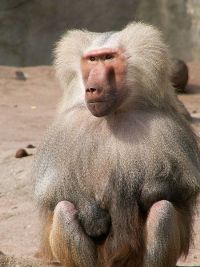 Something similar is seen in capuchins. When a capuchin monkey takes the initiative to move, he looks whether at least three individuals are following. If this is the case, the rest of the group will follow. If this is not the case, the capuchin returns to the group. This latter study was done by researchers from the universities of Brussels and Kyoto and the Centre National de la Recherches Scientifique (CNRS) in Strasbourg. According to the researchers, the sequence of agreement and giving up clearly reveals the existence of a quotum: If three individuals follow the initiator, then the rest of the group will follow. The results of this study were published in the scientific journal Proceedings of the Royal Society.